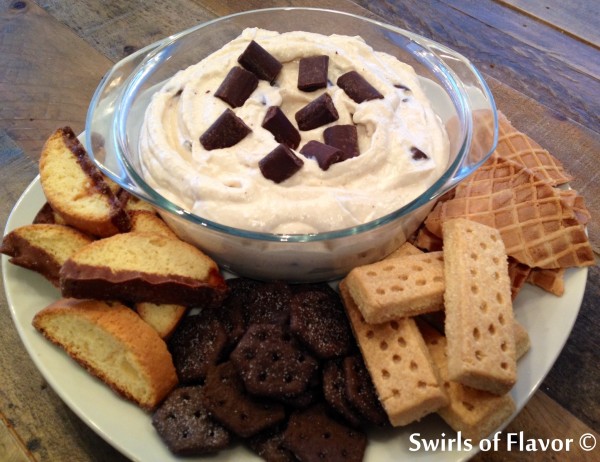 As the Super Bowl game begins to wind down and the appetizers have been consumed it will be time to bring out the dessert! And everyone always saves room for dessert! Watch the crowds swarm over this Chocolate Chunk Cannoli Dip!  They’ll love scooping up the creamy cannoli filling with cookies, biscotti, shortbread and waffle cone pieces! With just a hint of cinnamon and vanilla and chunks of chocolate, this sweet dip is to die for! Traditionally a cannoli is Sicilian but today it’s all-American! 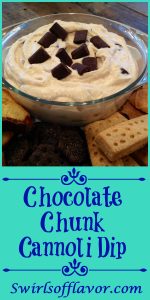 1. With mixer on medium beat cream cheese and confectioners’ sugar until fluffy and blended.

4. Transfer to serving dish. Serve with suggested dippers or other cookies.

Hi there, I'm Gwynn, also known to many as GG, the creator of Swirls of Flavor. Welcome to my kitchen where delicious memories are made. My passion is bringing people together through food. I create easy, family friendly recipes made with fresh, simple ingredients that are perfect for a busy lifestyle. So come on in and gather round the table. It's time to Cook, Share and Savor the Moments together. END_OF_DOCUMENT_TOKEN_TO_BE_REPLACED