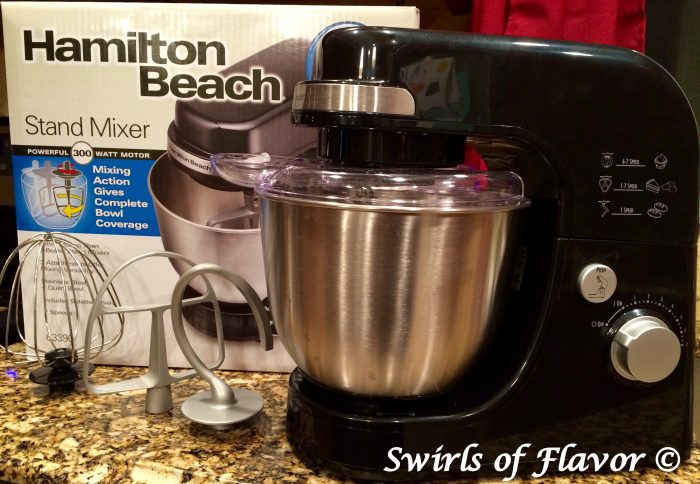 It’s another week and it’s another giveaway! The new year is starting off in a good way! The Hamilton Beach Stand Mixer is a powerful mixer with a 300 watt motor with seven speeds. It’s 4-quart stainless steel mixing bowl is flat bottomed and the mixing action of the attachments gives you complete bowl coverage providing even and thorough mixing. The stand mixer includes a dough hook, whisk and flat beater for mixing versatility and is surprisingly lightweight. Along with a splatter shield the Hamilton Beach Stand Mixer has nonslip feet. I love these little suction-cup feet! They keep your mixer in place even when on the fastest speed. The tilt-up head lifts out of the way so you have easy access to the mixing bowl. The stand mixer is perfect for making mashed potatoes, cake batters and cookie dough. I made Panko Garlic Mashed Potatoes for dinner along with Apple Crumb Pie Cheesecake Bars for dessert and both were so easy to make in the Hamilton Beach Stand Mixer! And clean up was a cinch! And did I mention how sleek and beautiful this machine looks on my kitchen counter? You are going to love this stand mixer!

Hi there, I'm Gwynn, also known to many as GG, the creator of Swirls of Flavor. Welcome to my kitchen where delicious memories are made. My passion is bringing people together through food. I create easy, family friendly recipes made with fresh, simple ingredients that are perfect for a busy lifestyle. So come on in and gather round the table. It's time to Cook, Share and Savor the Moments together. END_OF_DOCUMENT_TOKEN_TO_BE_REPLACED